Sometimes a break from the club soccer game can be a good one, especially when a player isn’t in a developmentally suitable environment. For some players, the club soccer scene can be seen as a harsh place with downsides such as unfair playing time, social pressure, and huge requirements of time and money from parents. All of this comes without a guarantee that a child will receive significant playing time or development as a player and a person – resulting in the player leaving the game.

In 2016, Gage’s father, Ryan White, received a job offer that required relocation during Gage’s freshman year of high school from Utah to Arizona. At 14 years-old, Gage found himself adjusting to a new environment in a new school and as a member of a new soccer club. He felt that club soccer was the one thing that would make his new home feel like home and based off his past experiences, expected a good experience from this new team. Unfortunately, the result wasn’t what he expected. Gage found himself in an unhealthy playing atmosphere, where he wasn’t being developed and at risk of injury. 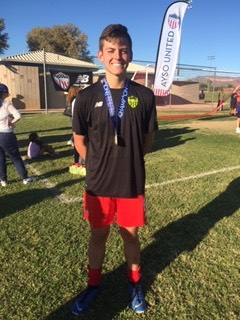 “I had talked to the coach before moving and was assured that his team would be competitive. He said they wouldn’t win every game, but they would be competitive,” shared his dad Ryan White. “We didn’t want Gage to be on a team where he would not be challenged, so being competitive sounded great. When we got here and went to the training and tryout, it seemed okay, but we got into the season and it was so bad.”

After a tough six months with his first Arizona club, Gage knew it was time to either find a new team or take a break. It was then that Gage received a call from a team he had just played offering him a new club to call home. Gage’s team had just lost 14-0 to this team a few a weeks prior but after a great show of heart and resilience, many of the parents in attendance noticed there was a special player in goal, no matter the result.

“We lost like 14 to 0 but after the game their parents all came up to me shaking my hand and telling me to keep my head up,” said Gage. “And then a couple weeks later I get a call from a team dad to come play for them. I don’t know how they found me, but I played a few tournaments with them and I just didn’t get a good feel for them.”

The final result with this new club still wasn’t good and it was then that he decided he needed to step away from the game he loved and focus his energy on football instead. He became the kicker for his high school football team, and joined the volleyball team but there was still something missing. He knew he wanted to get back to playing soccer and after a two-year hiatus, he made his return.

The return started when his friend Matthew Godinez, an AYSO United Arizona player, convinced Gage to come out to an AYSO United tryout. Matthew was eager to have Gage come and check out the club that he himself had fallen in love with. All Gage knew for certain was that he wanted to play on a state level team that would make him feel welcomed – AYSO United fit the criteria. An athlete who is technically talented with a clear voice on the field, Gage quickly caught the attention of AYSO United Arizona Director of Coaching, Ed Alameda.

“When I saw Gage during tryouts I was very impressed with his physical ability, his size and of course his skill. What is most impressive about Gage is his leadership,” said Alameda. “There are many players who are technically skilled but who do not have the confidence and character to be great leaders. I remember speaking to him after tryouts and asking him what he thought about what he saw. He told me he was very impressed with the level and speed of play of the boys trying out. Gage told me he initially was looking at trying out for another team, but felt like this is where he wanted to be.”

“I felt that there was more talent at AYSO United and the chemistry was better,” said Gage. “The way players interacted with each other was much better than the other clubs. They welcomed me at tryouts even though they didn’t really know me – it was great.”

Gage isn’t the only one to be affected positively by the club change. His father has also embraced AYSO United.

“AYSO United has given Gage the opportunity to get training at the highest level and has excel as a keeper and it is due to the training. Gage has always had the athleticism to go far, but with the training, tools and resources that AYSO United has offered, he has a legitimate chance to pursue his dream to play college soccer,” said White. “It’s a breath of fresh air compared to the other clubs he played with.”

Gage has already found some personal success with AYSO United Arizona. In just his first year, he has made it into the Olympic Development Program (ODP) player pool and made the first cut for the West Regional ODP Team. In July of this year, he was one of seven goalkeepers invited to the ODP tryouts in Oregon, a weeklong tryout that had nearly 80 players hoping to make a 30-man roster that would eventually become an 18-man roster. From Oregon, Gage was selected as one of the four keepers before the final cut. Gage attributes making it this far to the help of Ed Alameda, and his high level goalkeeping training that provided exponential growth in his development.

“Another major part of why I joined was the goalkeeper training that Coach Ed offers personally. He definitely knows what he’s talking about and it’s very reassuring when I come to him with questions,” said Gage. “And as far as the team goes, it’s a lot of fun. Key players can be missing from a game but with the team chemistry that they already have, they [coaches] can put players really anywhere and know they’ll still perform. That’s what was amazing to me.” 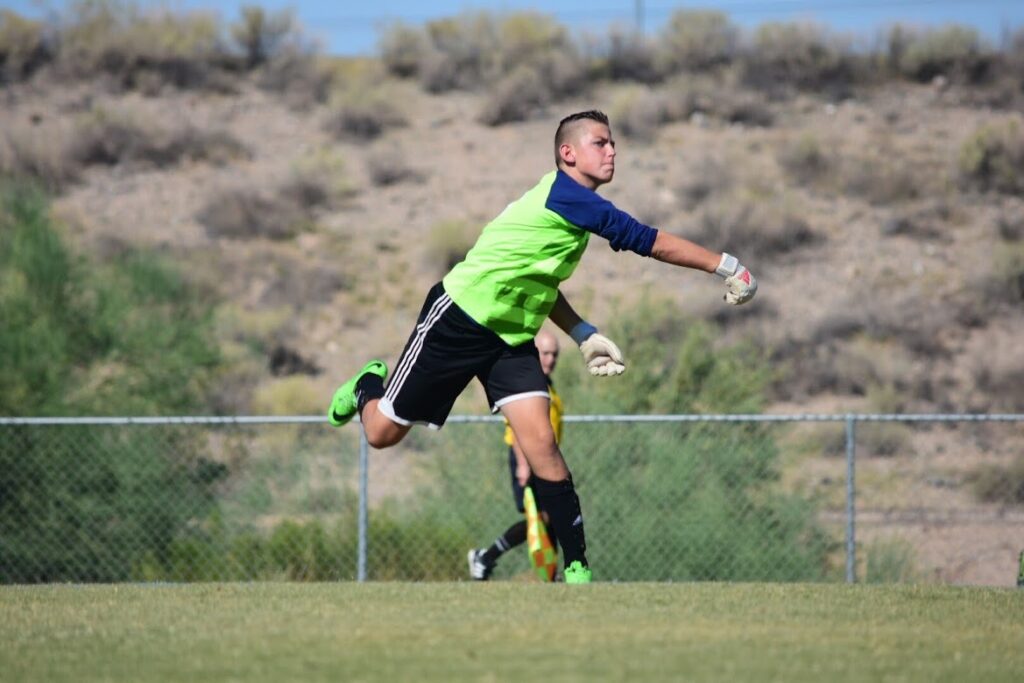 Gage’s story demonstrates that with a player-centered environment, players will learn and enjoy the most soccer has to offer. And in AYSO United Arizona, it all started with a positive coach relationship that has met Gage’s technical, tactical and social needs.

With the final ODP roster having been decided this past August, Gage was chosen as an alternate to the primary goalkeeper. Nonetheless, Gage is prepared and patient for the call up if the team needs him. Meanwhile, he’s going to make the best of the club soccer environment he has grown to love and trust thanks to the help of Coach Ed Alameda and AYSO United.

“I’m going to do my best to help the team be successful,” said Gage. “They can trust me to use my feet, my hands, trust my shot stopping ability, distribution and trust me to be at every training. I’m going to work hard and make sure I’m focused.”